The Deluxe Group has been awarded Best SME at the Aer Lingus Viscount Awards held in the IOD Pall Mall London in May.  The awards initiative celebrates outstanding NI businesses and individuals which promote best practice and who have generated significant business success over the last year in areas including innovation, export, employee focus and overall growth. 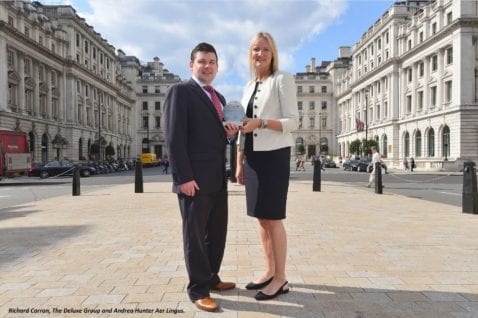 Colm Connolly, Senior Manager, commented “the team are delighted to receive this award, in 2008 the company developed a strategy to diversify to new markets outside Ireland which has proved fruitful as the turnover has trebled year on year since 2013”.  In 2016 The Deluxe Group made significant investment in new joinery manufacturing facilities increasing capacity to 60,000 sq ft to deliver large scale projects and this has provided a platform for the company to compete on an international stage.